This is Halloween … Halloween, Halloween 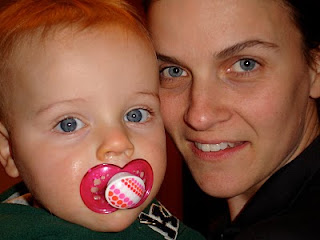 The hot humid summer has lost its stranglehold and a chill has crept into the air. Night arrives early summoning hidden and imagined things. We slip into costumes, shed out of our daily persona and bare our darker nature. The dark side has its own freedom and humor -- mischief is just a blending of the two!

The Weller brood is tight with Halloween, the tradition of mischief it delivers and the history it holds for us. To prove it, here is a picture of your Great Grandpa & Grandma in costume. 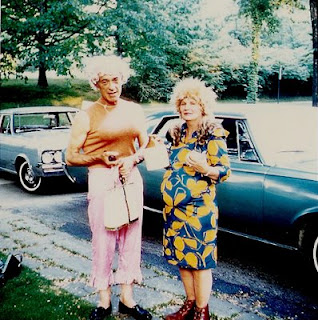 Halloween is the day Rachel and I first met at Merrick Bernstein’s party in Atlanta circa 1999. So Halloween is in your blood buddy.

Rachel was your Aunt Vanessa’s mysterious new friend. She was off limits because I considered hitting on a sister’s friend akin to shooting fish in a barrel. Furthermore, your Godfather, Rick Tuley, had a crush on her. So I arrived at Merrick’s in my worn leather pants, wife-beater t-shirt and long white wig convinced Rachel was unfair game. But it was Halloween where the rules are pulled inside out, everything is turned upside down … and she was such a saucy Pippy Longstocking! I fell for her at once. And Rick forgave me.

Though you are too young to explore your sinister side (aside from your normal tantrums), Rachel and I felt compelled to share our holiday with you. We joined a neighborhood Halloween parade of children in costume. We plopped into a comic book of midgets! You were a fighter pilot, Rowan was a lion, and Jack was some kind of gray spidery thing that looked squished. Your green flight jacket, a gift from your Aunt Vanessa, coupled with your baldness and stout demeanor cast a genuine albeit miniature illusion of an aviator jockey! You even had the cocky strut. 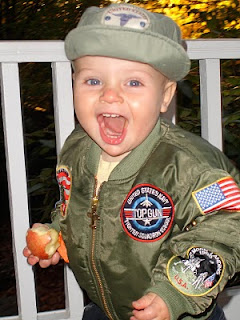 Earlier this quarter, we took a vacation to Hilton Head Island. Grandpa Weller, Vanessa and her boyfriend Tavis, Samantha and Godfather Rick all came to visit us. We had a cool house on the fringes of South Beach Harbor right next to the Salty Dog. Here's a set of pictures of you on the porch at the Doooaawg! 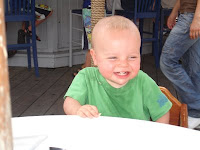 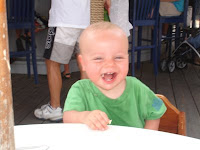 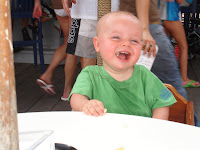 Hilton Head has a special place in my heart because Great Grandpa and Grandma used to own a villa there. I spent my childhood, teen, and college years playing on those beaches.

Oh, yes, you are walking and so you’ve morphed into a toddler. Frankly, it’s a miracle of physics that you can walk with that bulbous belly. You look like a lower case “b” with spindly legs kicking. How gravity doesn’t bowl you over is a mystery to me. Seeing is believing, I suppose, but symmetry argues it is all fiction.

Identifying your first day walking is a subtle science of truth and fiction as well. Rachel and I have different definitions of “walk” it turns out, my definition bleeding out inversely with the number of steps I witnessed (few). In my mind, you first walked in the living room from my hands to the stereo cabinet … one, two, three, GRAB! This was on Friday, August 3rd. Perhaps this could be construed as a controlled fall but a landing airplane is a controlled fall too and no one argues the plane is flying!

Your first day of, lets say, a more refined trot was Wednesday, August 29th. You showed glimpses of the skill early at Jessica and Matt’s house down the street. By the end of that day, you could motor though your endurance didn’t allow you range. Today you walk with the gait of a drunken sailor.

The freedom of walking has unveiled all kinds of emergent Luke phenomena. You have a special poop place. We often find you standing behind our table in the Kitchen with a beet red, grunting face. I suppose it is the privacy you hunt for?

As I noted in my last blog, you are highly coordinated and your ability to walk has underscored that. You now take a few steps and SLAM DUNK a small basketball into a toy hoop. You can dribble and kick a soccer ball. You even know which balls are for which purpose! When you are in a good mood, you highlight all of his with a little jig, shaking your butt to some internal tune. Your love of the outdoors is made apparent by your ability to put yourself places: you and Churchy often get cranky by the front door until someone takes you outside.

Your vocabulary reflects these interests and others as well. Not surprisingly, you say “baaa” for ball. The front porch and yard of the MacArthur house looks over busy street and you love watching the traffic screaming “caaaa!” (car) and, your absolute favorite, “BUUUUU!” (bus). “Bu” also means airplane which you wildly gesticulate for when one is heard overhead. It’s electricity to hear you communicate.

We got an incredible surprise this quarter: Rachel is pregnant! I'm not sure the three of us are prepared for another player on the team, but ready or not, we've got one coming. Luke, here is your new playmate: 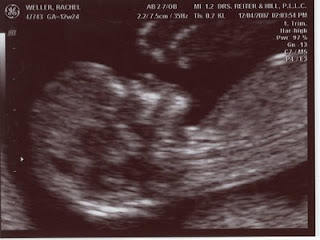 Cute, huh? I suspect you are in for a big surprise buddy. I suspect I am too.

Since you’ve been born, I’ve traveled all over the world. This year alone I’ve been to South Africa, China, and the U.K., the latter two several times. As I write this, I am flying over Hong Kong having just left an unintentional visit to the city because my Visa was rejected in Beijing. I see tons of opportunity in these places. However, as time passes, your awareness of my absence grows and so does mine. I miss you and your mom and I dream about you on these trips.