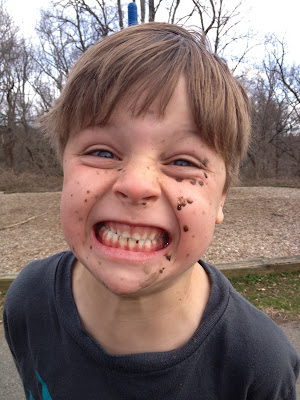 Outnumbered by girls two-to-one, the four boys of the 1st grade Otter Class are a tight crew. You call yourselves “The Gang.” On the playground, you play together, hard and fast, like boys play. But one afternoon, a game of chase got out of hand. Your friend Haddis, pursuing you but loosing ground, lunged and grabbed your shirt wheeling you around. You lost balance, flailed and whacked Haddis hard in the face. You bust his lip.


Any hint of blood at River School lands you in the principal’s office, or the equivalent anyway: Rachel XXX’s desk. By the way, you beat me to the principal's office by two years. In third grade, Gregg Brown and I landed in Principal McKenna's office for mock fighting in the lunch line. Fortunately, you treated the situation more seriously than me. Where I snickered uncontrollably infuriating the rather stiff principal at Sope Creek Elementary, you were remorseful, in tune with the severity of someone getting hurt.

The day of the incident, Rachel and I got a phone call from the school. They said it was  an accident. We came and picked you up as a family to ensure you got the message: this wasn't acceptable, accident or no. As punishment, we took away a few privileges to reinforce the point, but we were careful not to overdo it.

Consequences are funny things though, rarely efficacious through parental means. Rather, they worm their way in organically and not always in proportion to the offense. In your case, the day after the playground incident, you discovered The Gang had evicted you -- they would no longer play with you. 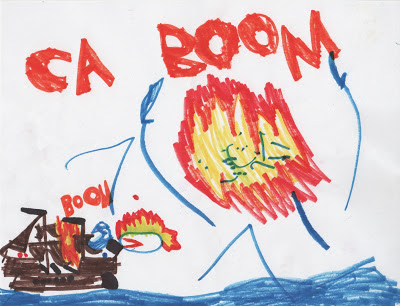 You were hurt, and as parents, we were heartbroken. We fought the instinct to intervene because we wanted you to deal with the adversity yourself. Living in a protective bubble never breeds tolerance to germs.


Still, dealing with the twists and turns in friendships is tough. Self identity is partly a reflection off friends. So I was terribly impressed with your matter-of-fact approach to your banishment. Sure, you were disappointed, but you objectively contemplated ways of dealing with it. With input from your mom, you decided to seek out new playmates rather than pandering for readmission. You decided to be your own man.

Executing on that plan took discipline, and you had it. For the next couple weeks, you played with other kids and developed new friends, allowing time and space to heal wounds. Soon, The Gang invited you back into the brotherhood. I was impressed that you didn't get swept away by the hurt, but were able to put it aside and act on a plan.

I hope the experience reverberates because such enlightened behavior isn't a noted trait of our family. We have a particularly notorious event in our history, the story of Hannah Dustin, a story Grangie excitedly shares with you guys (to my embarrassment). I've asked Grangie to share that story here below:


Picture a beautiful woman looking wild, furious and dangerous holding a tomahawk across her chest. That is your 16ish times great grandmother, Hannah Dustin. You are direct descendants of this powerful, heroic and intrepid woman from Massachusetts. In 1697 her village was raided by Iroquois braves in search of whisky. Hannah had just given birth to Martha four days before. Her husband fled to safety with her 8 other children. She stood ground. Hannah witnessed the killing of her neighbors and fought with the baby in her arms. An enraged brave dismounted and seized the baby from Hannah and brutally killed it by striking it against a tree.

Thus began a historic retaliation. She enlisted a companion and followed the Indians to to New Hampshire. She found them asleep by a fire in the moonlight. She killed and then scalped 12 of them and escaped. She was the first woman in the United States to have a statue erected in her honor for bravery in defending her village. The irony: some of her own family later married Iroquois and Mohawk Indians.

Much controversy follows this story, since the Indians suffered greatly too. Scholars have studied this case for many generations and defend her case with stuff like self defense and emotional trauma. Hannah's later generations married into the Cheney family, creating the most famous and prominent family in New England.  Your great grandmother (my grandmother) was Mary Dustin Cheney and she married Andre Joubert ("Andrew"). I called her Molly. That's how I became a Joubert (before becoming a Weller).

Unfortunately, the story has captured your imagination. I caught you and Darius acting out the events, screaming, "Take that Indians!" Imagine the horror of your teachers when you turned in this comic strip:

Yep, that's the Hannah Dustin story, in living color, scalps and all! Two steps forward, one step back.