Luke & Dad’s Second Year and a Half

The throng of besotted Jokers, drunken faeries and bloodied vampires was made further surreal by the trippy fluorescent lights of the emergency room. Moments earlier at home around 2 am, Rachel and I had woken to strangled hacking and choking. You couldn’t breathe. We ripped you out of bed and I dashed you to Georgetown University Hospital where the casualties of the town’s Halloween celebration gathered that Saturday night, November 1st, 2009, in a scene that would’ve inspired Tim Burton himself.

Croup was your nemesis and, like many scary things with children, it turned out to be common and easily treated. Sure, pediatricians suffer the repeated panics of the parents of first born, but, man, they need to hand out cheat sheets! Croup is damn scary and I should’ve been warned!

The doctors shot you up with a steroid, plopped us into a hospital bed, and gave us a tube contraption that spat out a steaming cloud of medicated vapor. You, of course, wouldn’t touch it. The machine appeared overly eager to suck your soul not unlike the random wandering clowns in the hallway. I explained that a giant, kind, blue dragon named Galadriel was blowing magic smoke into the tubes from deep in the hospital. You were amazed and proceeded to gasp down the steam between exclamations, “Dragon Smoke! Galadriel! Devastating!” This earned us stares from the nurses but by that time we were having fun despite the chaos of the night.

This experience fed two already overactive imaginations. I’m probably not doing any favors introducing creatures like Galadriel, Sprites, Vampires and another dragon named George that lives in our humidifier (he blows smoke too). I suppose I should be happy you haven’t plucked out your hair. Then again, the Wooobops were your idea, and you’ve taken to animating your toys into full fledged personalities. Most prominent is Mater, as in “To-mater without the Ta!” -- the bumbling blue tow truck from Pixar’s Cars. Your godfather Rick gave you Mater and he is a rather demanding member of the family.

Your toys have organized themselves into cliques. My favorite is your bedtime crew. Your day ends in a two book reading accompanied by a ba-ba serving, then we brush your teeth, turn out the lights, lie you down, and then … The Posse! Just after you enter your crib, you are joined by three characters. First is Elmo, your nearest and dearest friend, and he is placed on your left. Second comes KungFu Panda who you and I acquired at the National Zoo (after seeing a real Panda) and he is placed on your right. Finally, Baby Beluga joins who was a gift from your Aunt Samantha after hearing about your fascination with the graceful whales at the Atlanta Aquarium. He lies between you and KungFu Panda. After your posse is assembled and your thousand pacis are within reach, you get two blankets, aptly named "Blanket #1" and "Blanket #2", placed upon you in that order. I tuck the blankets around you and The Posse and you look like a chunky burrito when I kiss you goodnight.

Bedtime is fun when you are amenable, but my favorite activity is playing “tent”. The two of us jump into bed and throw a down comforter over our heads creating a cream lit world where everything falls away but you and me. A little insulation from the torrent of color in the world helps us focus. Today, your language is not mature enough to explain everything on your mind, so the tent allows us, without distraction, to patiently explore avenues of thought. I find treasures in the tent, phrases that pop out of your mind reinforcing how incredibly observant you are.

I couldn't find a better place than the tent for our quarterly interview:

I have a bonus interview this quarter done at Rick's house where we spent Christmas. I captured you impersonating a reindeer in this video:

While in Atlanta for Christmas, we went on your very first roller coaster ride called "The Pink Pig." It's a famous coaster for children that used to be housed at the Macy's in downtown Atlanta but is now housed in Lenox Square on Christmas. Here is your ticket for eternity: 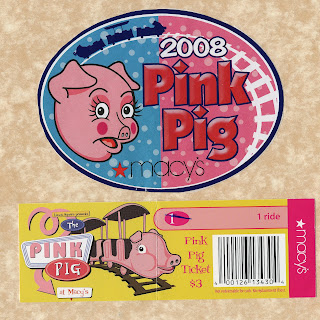 Before I sign off, I must mention your continued fascination with music. You’ve taken to singing and you’ll grab your partially strung toy guitar, sling the base over your shoulder violin-style, and strum it while singing “My summer giiiril!” with Beck. I can’t bring myself to correct your guitar posture because I think you like the sound close to your head. At least you play the harmonica normally. You also have some abstract painting talent: 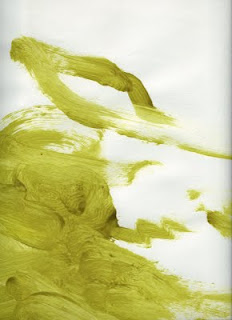 Unfortunately, your musical genius carries with it a disease common to the Weller family. You have extremely little patience with songs you don’t like, tantrum style lack of patience, and, much to Rachel’s chagrin, you like songs LOUD and you've figured out how the volume knob on the stereo works! When you do like a song, the house quakes!

1) Rachel and I had tickets with the Drants to go to Barak Hussein Obama’s inauguration on the National Mall, but instead watched it at Old Ebbitt Grill. Losers.
2) We celebrated Christmas in Atlanta with Grangie, Samantha & Rick.
3) You and I had a guy’s weekend in DC when Rachel & Cash went to Texas for a family get together.

Three Songs I’ve been listening to: