I’m posting this blog on Tuesday, July 29th one day before your birthday. Your birthday deserves its own celebration so we will wait because another significant event in your life has taken place …

You’ve got a new baby brother! 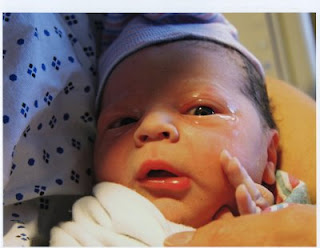 Cash Henry Weller was born on Tuesday, June 24th 2008 around 5 pm at in . He weighed 8 pounds 5 ounces and arrived with a full head of black curly hair and nice olive skin. If he hadn't come equipped with a long index toe, I would’ve asked for a DNA test. 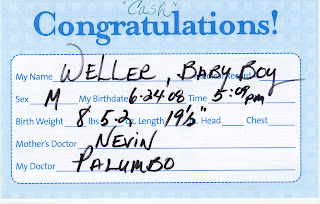 I brought you to the next day, Wednesday, June 25th, to visit Rachel and your brother, the later for the very first time. You knew something was a foot. We entered the red brick hospital and you were curious, so piqued that you didn’t run screaming at the sight of nurses (shots).

We entered a crowded room filled with visitors including Ryan and Charis Drant. When I finally shuffled you close enough to look at Cash, you didn’t say much. You looked contemplative. That lasted a few seconds as if you thought, “interesting … ok … but why are you still holding me over this thing?” Any further attempts to show you Cash resulted in, “Don’t want it!”

The arrival of a new sibling can be a cataclysmic event for a first-born two year old. It’s that startling discovery that the world doesn’t rotate around you alone! Heck, an entire society couldn’t accept Galileo’s observation that earth was not the center of the universe. Why should we expect more of a child? 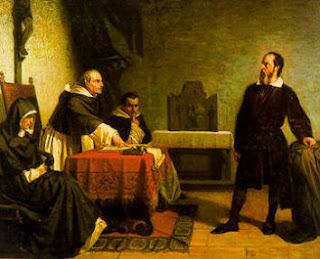 As usual, I am saying more about me than you. When I realized Vanessa wasn’t just visiting, I dedicated several years to crushing her. Ask Grandpa Weller about “the Cookie Monster Puppet Attack” he captured on film. Let’s just say I tried to blame the puppet.

So your life, like ours, has changed dramatically. Instead of playing in mom’s lap, you watch Cash breast feeding. Instead of you and me going to breakfast on Saturday morning, you eat eggs quietly while I soothe Cash. Instead of visiting the zoo with mom, you play by yourself in the kitchen.

That’s why I’m so incredibly proud, PROUD of you. You've welcomed your brother in the face of a million reasons not to. The changes have stressed you with painful moments that show at times -- sadness for no reason, tears without provocation -- but you treat Cash with love and deep interest. You huge him, give him Eskimo kisses, and shout, "such a good bruder!" We’ve seen a grace, a true beauty in you we’ve never seen before and it makes us so terribly proud to know you.

Stepping out of the ray of sunshine, life continues as does your development. Most entertaining to me is your relationship with music. You recognize songs and artists. If “Teenage Wasteland” is playing, you scream “Da Whoooo!" This behavior has evolved to incorporate some creativity and therefore unpredictability on your part. For instance, at Rowan Drant’s crowded birthday party, Coolio's “Gangsta’s ” reverberated. Out of nowhere you shouted,

(I have no idea where that come from. Charis Drant is a huge backer of Obama. Just shoot me.)

Our favorite song right now is “Jiggy With It” by Phish, or “Jiggy For It” in Lukanese (interesting preposition twist). We’ve taken to dancing together to it.

Speaking of creativity, one afternoon you randomly started referring to “Wooobops” as if they were running around the house. I was confused and a little concerned. I decided we should draw a Wooobop collaboratively to try and identify this mysterious noun. While tangling over who should pilot the crayons, we drew wacky creatures, eliminated inanimate objects, and finally discovered Wooobops: silly, colorful, comfortable monsters. I still don't know where they came from, but I like them too. May I introduce you to Wooobops: 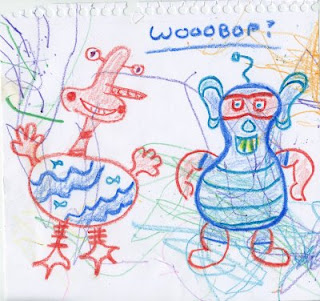 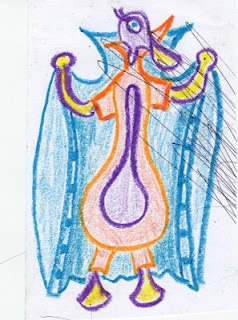 One morning working out, I made the mistake of pointing out your shadow. You screamed bloody murder. The dark specter was following you everywhere! AAAaaaaaah! Of course, I couldn’t eradicate this beast. (I experienced one of those "why do I do this to myself" moments.) So I claimed the shadows were Wooobops. It took some convincing, but now it’s amusing to see you give Eskimo kisses, nose to the floor, to your Wooobop. 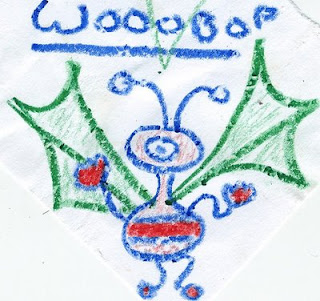 You are now making attempts at counting and you generally know your ABC’s. You can see this progress in our quarterly interview!

One final note, your aunt Vanessa received her masters from NYU in digital animation this quarter. We are so, so proud of her! Here is a sampling of her work: