I sleep with an imaginary light saber under my bed. I introduced you to Star Wars, to Rachel's chagrine, aiming to foster an imaginative mind. Now I spend much of my time as my alter ego, Obi-Wan, defending the Republic from you, Anakin Skywalker, and the rise of the Empire. Our battles are immeshed in a drama that unfolds daily ... enter our storybook world ...

I guess its appropriate it happens here. Mustafar. Ruptured by the gravitational forces of two large stars, Mustafar is a torn planet. I too am torn by two forces, love and duty, and I too bleed like the Mustafarian lava flows. I am here to destroy him, my beloved friend and Jedi, Anakin Skywalker.

I stare at what he has become, or may I say, consumed by: the saber bearing Darth Vader whose eyes rage. The boy I trained has turned on us, on himself, and betrayed us all. Yes, I will destroy him.

I respond. My green saber riffs, unsheathing. "Anankin, I have failed you."

His attack is swift, coming from high, slicing down. I step back driving my saber down to block, shielding my lower left. Our sabers collide crackling. Seeing my weapon trapped low, Vader ricochets his weapon up towards my exposed chest. "Hah!" he screams, sensing victory.

Yet Vader underestimates a Master's speed. I leap backwards and his laser tip sweeps past, momentum carrying his saber upwards, so I thrust low towards his abdomen. I am suddenly thrown back and breathless by a wall of force as Anakin's non-sword hand jolts forward.

My god. He has become strong with the Dark Side.

Vader runs forward, swinging his blade side-armed and I block again, but this time Vader steps under me and rips his saber across my waist. I am vanquished.

Anakin, I have indeed failed you ...

This scenario played out in our living room yesterday. Saber fighting has become our primary form of exercise; you never get enough of it. I must admit that your sword fighting skills hint at a future in fencing. The infatuation with Star Wars has resulted in a significant investment in action figures and plastic light sabers (you have six). Needless to say, you were Luke Skywalker for Halloween.

We've experienced unintended consequences of Skywalker immersion. The primary impact is a sudden interest in robots. Your goal in life is to become a robot builder. You create robots out of paper and legos, and name them things like "YX-6". Another consequence rose from the observation that women are rarely warriors in the early Star Wars movies. This resulted in a short-lived conclusion: "I don't have to take directions from a WOOO-MAN!" Needless to say, this misconception lasted about as long a the phrase itself.

I was very proud of you this fall during soccer season. On the River Raptor soccer team, you were shy during the first two games. I was a bit worried, wondering if we were pressuring you too much.

Then came the third game. Uncle Tavis and I watched as you underwent a transformation -- you went on attack, aggressively playing the game and dominating. I've never seen anything like it. One piece of advice when you have children, Luke:

Particularly if he is a Jedi Knight. I'll end with a simple observation: one should never leave an iPhone around a five year old. Aside from it disappearing and showing up in sinks, potties and such, you might discover mysterious self portraits on your phone. 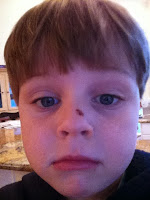 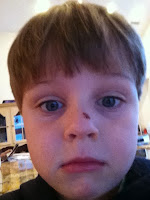 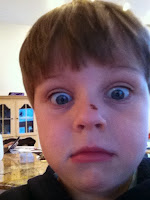 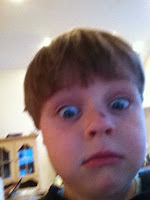