The ending of River School kindergarten brings to a close a most storied Cashy scholastic experience, “Rest and Read.” As we all know, you are renowned, non-stop talker, thus R&R imposes an insidious restraint, the requirement to stay silent. You've used every weapon in your armory — screaming tempers, kitty eyes, prison escape, teacher strong-arming, hard nosed negotiation, school room mutiny — and still been trapped into R&R.

When you were younger, we spent many a morning consoling you, trying to ease your fear of the impending horror of R&R. The worst part was the pre-school whining.

Recently, however, something has changed.

Machismo has entered the scene. Acting like a baby is no longer acceptable, likely cascading from your older brother who no longer wants to hold my hand in front of his friends. These kids are becoming more aggressive, more boyish, more competitive and that has seeped into our household.

Whatever the case, I overheard this conversation this morning:

Cash:  “At Rest and Read yesterday, they got mad at me and I got sent to the principal’s office."

Cash:  “I wouldn’t stop talking at Rest and Read!"

[Quick commentary here: The word “right” has entered school verbiage evolved from the British show, Monty Python, in the 1970s where, “Right!” was used to reinforce a notion just said that one wasn’t so sure of. The use case here has the same function, but as a prefix to, rather than following the sentence.]

Luke:  “What did the principal say?"

Cash:  “Nancy said I had to be quiet. But I said no and took some candy."

In other words, my two midgets are at the formative stages of thwarting authority. Ever since the beginning of time, young people say "NO!" to the older generation, to what's happening in the world. And, disconcertingly, I’ve discovered I am a cornerstone of the authoritative institution.

More specifically, I am no longer “Dad.”

I probably deserve this for continuing to call you “Cash Machine” despite many cease and desist demands. Nonetheless, I suspect this is a symbol, a rejection of my fatherhood.

I am the dad in Tugenev’s Fathers and Sons where the son, Barazov, turns to his conservative father and says,

"We base our conduct on what we recognize is useful. In these days, the most useful thing we can do is to repudiate, and so we repudiate. Everything."

The father asks, “Everything?"

The son replies, “Everything."

The father realizes his son repudiates him too, as father.

This sort of philosophy is called Nihilism. In Fathers and Sons, Barazov defines nihilism outright, “A nihilist is someone who bows to no authority, who accepts no principle at face value, no matter in how much respect that principle may be held.”

The rise of nihilism rose from many forces, but foremost were the horrors of world scale war and the advances of science. Both were collapsing traditional morals and values, showing them inert or just plain wrong. God, long regarded the source of absolutes, was “dead" concluded Nietzsche.

Nietzsche was the first to treat nihilsm as a serious philosophical matter though he was commonly misidentified as a nihilist himself. He meant “dead" in the sense that traditional religion no longer held sway over modern culture. In the absence of absolute values, a vacuum had been created and, for a time, it would seem that nothing existed, nothing was real.

For Nietzsche, though, this nothingness was temporary, a momentary void from which the more evolved human, the Übermensch, would birth something entirely new. He saw the collapse of absolute values as an opportunity for us to reexamine our fundamental truths, to retool our systems. Nietzsche also makes a point that the "overman" is not an end result for a person, but more the journey toward self-mastery.

In that light, I am pleased being called Harry.

If your self exploration means a rejection of authority, even to the base idea I am your father but instead just “Harry," I am ok with that. I see courage in the willingness to defy things, even the most scary like death. I do suspect there is self realization the other side. 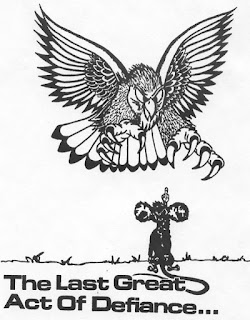 I also feel no restraint in my willingness to defy the youth that will inherit the earth! Dropping you off at school in front of your friends, I’ll be in a bathrobe and flip flops with a final wave yelling,

“I love you Cash Machine!"

P.S. I should point out that the term Übermensch was stolen by Hitler and the Nazi regime to describe their idea of a biologically superior Aryan or Germanic master race. Its another contortion by the Nazis. Nietzsche himself was critical of both antisemitism and German nationalism.
Posted by Harry R Weller at 12:00 AM No comments: