Luke & Dad's Fifth Year and a Half 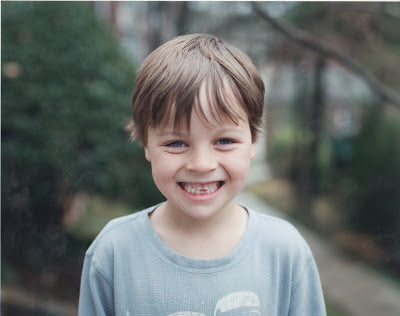 A horde of alien robots has colonized your bedroom. They’re formed up in two neat rows on a wooden chest, waiting at attention for the commands of Mr. Makuru, the chief architect of Makuhero City where the machines originate, a leader that masquerades as an earthbound six-year-old.

The robotic heroes are pledged to uphold peace and prosperity for the universe, but they look menacing to me. The automatons stand watch over a mess of clothes and toys whose disorder stands in stark contrast to the robots’ orderly phalanx. But don’t be fooled, in chaos there is order; everything in that room has its place apparently. I pity the soul that dares move anything. 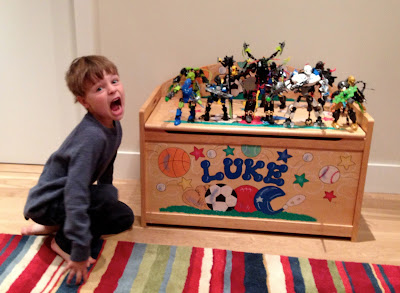 That is, if you can make it in. Ever since the invasion, the entry to the robot sanctorum is a portal sealed. Wayward humans, particularly those greater or less than six years old, are restricted access. Mr. Makuru protects his minions. Enforcement of the “keep out” practice is a new phenomenon, one I’m not thrilled with since I paid for the hardwood within those bounds. But that hasn't been as bad as this:

"Dad, Lego Hero Factory is cooler than Lord of the Rings."

Your Hero Factory robot "addiction" (your word, not mine) does have a wonderful side effect: igniting your entrepreneurial spirit. Early this fall, you decided to make some coin by writing and illustrating a book about these mechanical creatures. The inspiration to write, a task you normally adroitly avoid, says a lot about your passion for these characters.

You slapped on a 50¢ price, took over our color copier/scanner and turned into a salesman. You sold copies to my mom, the Kramers, a plumber and our painters among others. You learned that the first book is the most expensive to develop but that copies are near free -- the economic cornerstone of software economics too!

I bought a copy. Here is the work: 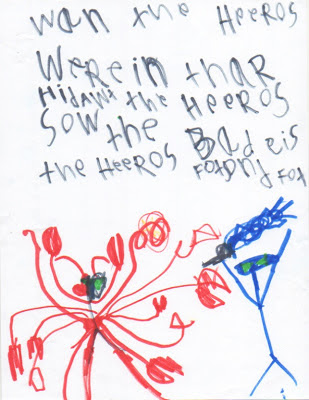 When the Heros were in their hideout, the Heros saw the bad guys. The Heros fought and fought. 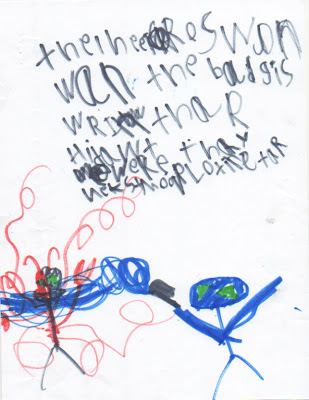 The Heros won. When the bad guys were in their hideout, they were plotting their next move. 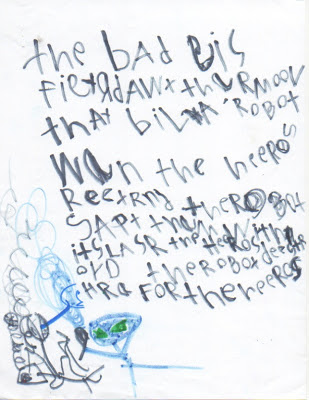 The bad guys figured out their next move. They built a robot. When the Heros returned, the robot zapped them with its laser beam. The Heros destroyed the robot. Hurray for the Heros!

Since creating this piece, the quality of your writing has vastly improved. Rachel has been a big part of the reason, but I recently uncovered another source of motivation during a River School field trip.

I drove you and a little girl named Sophie XXXX to a DC aquarium specializing in indigenous fish species. I noticed immediately that you acted, well, older around Sophie. Evaporated were the antics you normally engage in with, say, Charlie McGruder where I am an target to harass.

This time I was a source of infinite embarrassment. A Sherlockian observer would've put things together but your dense father only figured it out later when you asked one too many questions about girls.

Luke, you have your first crush! And, surprise, Sophie is the best writer in the class.