Luke & Dad's Seventh Year and a Half

The fly infestation is my fault. Hoping to encourage your blooming interest in nature, I showed you a picture of the beautiful Orchid Mantis. The creature evolved alongside the pink orchid in Malaysia achieving stunning mimicry. Even its legs resemble flower petals. 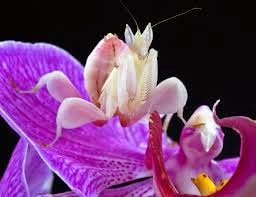 I should’ve realized the image would lead beyond appreciation to an inevitable question: “Can we buy an orchid mantis?" With a sly wink to myself I said, “if they sell them!” believing no one sold such things.

Of course they frikken sell them. They sell everything online. What was I thinking? And, god knows, we can't just get one.

I am raising two baby Orchid Mantids, one in each of your rooms. They are each named after an Orc of the Tolkien kind (get it, Orc-id), but I don't like the joke so I never remember their names.

I now have a non-paying full-time job keeping the Orcs alive because you kids, shockingly, aren’t helping. It turns out, unlike puppies, the mantises themselves aren’t hard to raise when young. Its their food that's the problem.

I'm not a doctor because biology, in my mind, is the study of the phlegmy, fleshy, sticky stuff of life. Blood, saliva, puss, put a bullet in me. I'll take the logical cleanliness of a physical law, no matter how imaginary, above the wet, messy study of carbon-based lifeforms. Even being a businessman is cleaner.
But now I’m an expert at conjuring swarms of blue bottle flies, the bugs the mantis eat, out of homemade cultures of squirming, slimy larvae I mix in jars. Disgusting. Even worse is the logistics of getting flies to go where you want them to go. Coaxing the flies out of the culture jars and into the Mantis’ Hexadrome home has been a monumental disaster. You see, flies fly everywhere. Even they don't know where the are going. Everywhere but into the Hexadrome.


Now we have a fly infestation in our house. I spend a good part of everyday murdering piles of flies with a fly swatter. I regret, everyday, getting twelve foot ceilings. At night-time, the flies that escaped my scourge congregate around our bedroom reading lights as we settle down for the evening. Nothing is more irritating than random buzzing when trying to sleep. Imagine the withering looks I get.

I've developed wicked tricks to subdue the creatures to transport them more easily. Tossing the culture jar into the freezer is the most nefarious but efficacious. By chilling them, I effectively cast an Immobilize Spell by slowing their metabolic rate to, well, cold. I pour them into the Hexadrome before they reanimate.

This would be great if I didn’t pathologically forget about the jars once ensconced in the freezer. Chilling them slows them; freezing them kills them.

When I go to hell, I’m going to be attacked by legions of very frosty and flattened flies.