What is a Boy? 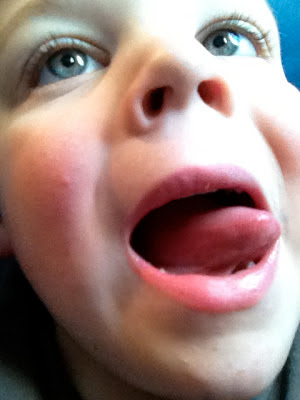 So, your guest blogger today is your G^2 Gramps Harry Jr., and make no mistake Cash, he is talking about you and me! Here is a copy of the actual letter followed by the text, blog-style! If only Harry Sr. imagined his letter in this form ... 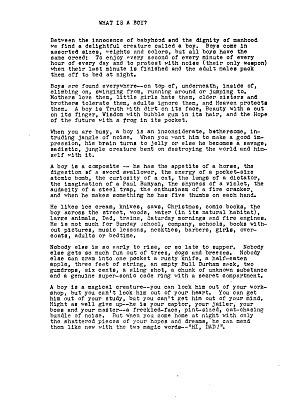 What is a Boy?

Between the innocence of babyhood and the dignity of manhood we find a delightful creature called a boy. Boys come in assorted sizes, weights and colors, but all boys have the same creed: To enjoy every second of every minute of every hour of every day and to protest with noise (their only weapon) when their last minute is finished and the adult males pack them off to bed at night.

Boys are found everywhere -- on top of, underneath, inside of, climbing on, swinging from, running around or jumping to. Mothers love them, little girls hate them, older sisters and brothers tolerate them, adults ignore them, and Heaven protects them. A boy is Truth with dirt on its face, Beauty with a cut on its finger, Wisdom with bubble gum in its hair, and the Hope of the future with a frog in its pocket.

When you are busy, a boy is inconsiderate, bothersome, intruding jangle of noise. When you want him to make a good impression, his brains turn to jelly or else he becomes a savage, sadistic, jungle creature bent on destroying the world and himself with it.

A boy is a composite -- he has the appetite of a horse, the digestion of a sword swallower, the energy of a pocket-size atomic bomb, the curiosity of a cat, the lungs of a dictator, the imagination of Paul Bunyan, the shyness of violet, the audacity of a steel trap, the enthusiasm of a firecracker, and when he makes something he has five thumbs on each hand.

Nobody else is so early to rise, or so late to super. Nobody else gets so much fun out of trees, dogs and breezes. Nobody else can cram into one pocket a rusty knife, a half-eaten apple, three feet of string, an empty Bull Durham sack, two gumdrops, six cents, a sling shot, a chunk of unknown substance and a genuine super-sonic code ring with a secret compartment.


For me, the work simultaneously transports me back to my own childhood while capturing today’s experience of being a father. That memory of childhood coupled with the experience of fatherhood, those two notions together in close proximity, conjure a question:

Would I want me as a father?

That’s a tough question to answer. But the answer may matter less than the process the question represents: the process of asking myself that question each and every day. I want to be the best father I can be(come) for you.


P.S. Well, how about this: the essay ISN'T by G^2 Weller, but rather by someone else! A nice reader pointed this out as you can see below. I'm now going to go a pop Gramp's bubble!
Posted by Harry R Weller at 12:00 AM

Just as some information:

The "What is a Boy?" essay is great but was actually written by Alan Beck circa 1950. I own a signed, framed copy of the essay given to me in 1956 by Alan. It is an advertisement for New England Mutual Life Insurance Company. The Illustration is by the artist Stan Ekman. Below is a link to the "What is a Girl?" version of the same advertising campaign.