I’m sitting at the bottom of Bald Mountain at Sun Valley, Idaho in cozy River Run Lodge waiting for your mom to complete more aggressive skiing than my snowboarding skills allow. Frankly, I spent the last hour falling headlong down the mountain, yearning for the warm hearth I am now enjoying. How the hell did I ever Snowboard without a helmet?

Anyway, I’ve been anxious to get a few moments to capture a classic Lukey scene from yesterday. Rather than drop you and Cash off at Dollar Mountain’s ski school as we usually do, the Weller clan engaged in multiple family activities including bowling, arcade games, swimming in a steaming outdoor pool, riding gondolas, eating cheese fondue and generally mucking around. We had great fun despite the occasional Weller scuffles here and there.

On the way home from pizza dinner that capped the day, you started asking for “goggly eyes”, little plastic eyes that morph any object into a creature of remarkable personality. All you need is a little glue. You wanted to add these eyes to black paper and cutout the outline of a spider. Sorry, not just a spider, but Shelob, the wicked spider-god from Return of the King and your current obsession. 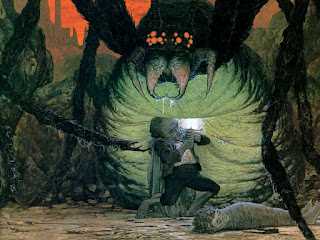 What came next was a chain reaction of Lukey realizations that was fascinating to watch. You decided you were not satisfied with just one spider, so you decided to manufacture lots. Then the first light bulb went off:

My head snapped your direction. Do I have a budding entrepreneur on my hands? Does my son take after the many visionary risk takers I work with? That’s when your eyes widened, the second bulb igniting, blazing away any doubt of your potential.

“Because its my idea, I get to be the boss!”

Boom. Inspiration and creativity are core to entrepreneurial drive, but the mother of all invention is not wanting a boss, ever. So absolutely yes, if its your idea, you get to be the man! The possibility of working for myself didn’t enter my mind until my late twenties. You beat me by two decades, son.

When you noted that you’d like to run a toy store from which you could sell your Shelobs, you asked another observant question:

“What if no one comes to my toy store?”

After a pause you said, “Maybe I’ll put up signs.” You’ve already got marketing figured out. (Maybe you could teach me a thing or two about marketing as I seem incapable of marketing myself.)

Aside from the entrepreneurial possibilities, we may also have a budding ski stud. Here at Dollar Mountain, they facilitated a series of kid ski races. You won your five-year-old age group despite this being your first week of skiing ever. Between you and Cash (who also won his age group), I can see us spending an ungodly amount of money pursuing this hobby. Luke, the sooner you get that startup going, the better.